Virginia’s Retrogramme have done well by keeping their genre options open on their new album Feed. The music on their third LP falls under the the broad category of dark electronic music, with liberal use of tropes from darkwave, EBM, futurepop, electropop and even a touch of electrogoth nicely accenting the band’s strength as programmers and arrangers. It’s a smooth listening record to be certain, the product of an act who are carving themselves a niche within the borders of Our Thing.

The multi-discipline approach is laid out fairly well in the first third of Feed‘s ten tracks. The first proper track “She Gives Me Nightmares” is an effective slice of peppy dancefloor candy, where aloof vocals from Jenna Christensen float over bouncy synthlines and before hopping into a pleasingly melodic chorus from male vocalist Dmitry Pavlovsky. It’s a very nice contrast to “Thorns”, where a wholly different and conversational vocal interplay between each singer is set against a propulsive bassline, sharp guitar chords and chiming synth bells. Switching it up again for “Confidant”, Retrogramme recast their sound as breaksy-darkwave that recalls some of the Projekt roster’s more upbeat moments in spirit if not in exact instrumentation.

All the genre-hopping wouldn’t mean much if the studio work from producers and songwriters Rob Early and Nikk Allen wasn’t up to the task. The duo have a good grasp of when to deploy each of Retrogramme’s many stylistic formations, allowing a track like “Psychosis” to ramp up and down and weave through a few distinct feels and postures without coming off as unfocused. Similarly the synthwave lead that opens “Angel” might seem out of place had they not already put in work to establish and take ownership of the other elements in the mix. While the album occasionally suffers from some small mixing issues (a few tracks have distractingly loud vocals and oddly seated synth parts), the band has done their work setting up their sonic identity such that carries them through the occasional rough patch.

Dipping your toes into differing styles isn’t as easy as Retrogramme make it sound on Feed, and it reflects well on the band that their skill lives up to their musical ambitions. Although the strongest material is loaded towards the front of the record, making some of the back half feel less accomplished, it never stops being a pleasant and easy listen. The group have hit upon a very mutable formula they can keep expanding and refining, with this as an excellent point for unfamiliar listeners to jump aboard. 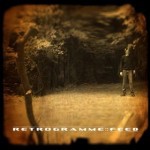