Christian Ryder, the frontman and “mind” of the Italian project, has the rare capacity to transform his music into something unique and unrepeatable, performing compositions of highest level that always hit the target. In the new album “Jedem Das Seine”, the polychromatic combination among electrowave, electropop and 80’s intuitions, generated sound perspectives extraordinarily attractive and intelligently various in their musicality, thanks to instrumental alchemies and vocal structures constructed with great experience which know how to conquer the listener from the first moment.

Linear, vibrating and pulsing drum-programming creates danceable rhythmics, sometimes minimal, actively connected to ultra-melodic flurries of synths, to backlights of guitar and to an alternation of cloudless vocals, sometimes obscured by more harsh tones: the songs of this release are a continual succession of pop technology, suggestive retro-wave elements and elegant modernism, for a full-length of immense value that you will remember as the best of the band’s repertoire.

The new TourdeForce, further matured, is innovation, research and resourcefulness: he now stands proudly on the electro scene, proposing twelve tracks of rare magnificence that will astound the entire audience: beyond the concept of the beautiful and destined for greatness: “Jedem Das Seine” is exactly the album that you are waiting for. 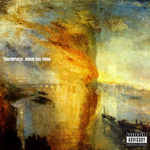