The Roman formation Halo Effect, by far among the most quotable and promising ones of the international electronic scene, it officially proclaimed as operating band since 2001 with the following line-up: John Andrew Peverieri (vox / lyrics / musics), Alessandro Polinori (second vox / keys / lyrics / musics), Federico Rosi (keys / musics) and Marco Cattani (keys / guitar / musics). The sound system of this project extrapolates, interpreting them through a scheme impeccably executed, the different and sometimes experimental modulations arising from the stylistic trends of the band’s members, with a marked predominance of synthpopish trajectories combined with the best theorems of Electronic Body Music, with mechanical industrial procedures and the suggestive obscurity of darkwave. The functional synergy between these factors determines the melodic paths so immediately capturing, hyper-danceable, always engaging and highly energizing, that since the foundation of the team they have conquered a large audience of admirers. Particularly active and dragging on the live front, Halo Effect also shared a congruous number of gig-sessions with renowned representatives of the European electro scene, as Melotron, Covenant, De/Vision, Cruxshadows, Bloody, Dead & Sexy, Ionic Vision, Greenhaus, Krisma and Steve Naghavi from And One, confirming definitively them as band of excellence through a long and successful series of remixes processed by artists well anchored on the independent technological universe of music.

Halo Effect’s discography deserves a detailed understanding and a worthy illustration, this in virtue of the high standard that has consistently and systematically distinguished each release, in addition to the indisputable prestige of the all participants who have cooperated in the drawing up of the many remixes contained in tracklists. Then, listing the full record production created by the the ensemble, initially we mention “Past Continuous”, a first self-released test of four-tracks dating back to 2003, followed in 2005 by the six digital-self-produced songs of “Days Of Silence”, among which it stands as bonus track a cover of the famous “Photographic” by Depeche Mode, a band at which synthpop metrics are often inspired the compositions of Halo Effect. “Rome Effect” of 2006 is instead a digital-release of eight synthpop songs recorded live in the Italian Capital, in which they are contained songs written by Halo Effect neatly alternated with Depeche Mode covers. “Schwarz”, digital self-released Extended Play published in the year 2006, consists of seven tracks, while “New Romantic Industry” is in fact the debut album licensed in 2008 by the Belarusian label Haze, which title-track of fourteen songs included is a bonus song, the beautiful cover of “Join In The Chant” of Nitzer Ebb. The year 2009 was characterized by four digital-remixed singles distributed by the German label Ionium Records, parent-label of Afmusic: the first of them, “It Was Nothing”, is a nine tracks release remixed by the electro projects A Spell Inside, Ecstatic Mood, People Theatre, Revolution, Luca Urbani, Zero AD Dave Luxton, Blank and DJ Marimba. They followed the nine-remixed tracks of “Days Of Violence”, reinvented by the projects Flatline, Skoyz, Lujhboia, Vortexsoundtech, The Crystal Apes, Azazel Haunted, TheHeadcase, The Violent Vocations and DJ Runken, anticipating the seven songs of “Their G.O.D.”, remixed by the bands Guerrilla, The Eternal Afflict, Vondage, Global Citizen, A.D.A.C. 8286, Noorglo and DJ Energumeno. As many seven remixed songs are included in “Hammer The Gear”, re-played by Celtic Tribes, Spektralized, Divider, FabrikC, Naukilot, DeadTronic and Controlled Collapse, which was followed in 2010, again for Ionium Records, the six remixes of “Life Goes On”, reworked by Octolab, Human Decay, Supreme Court, Mind.Area, Batch ID and Led Manville. In the same year 2010 it was the turn of the second full-length, “The Fourth Zone”, self-release of twelve tracks, which digital versions were fired by Ionium Records, all until the partnership of Halo Effect with the Italian label EK Product occurred in 2012, by which it was published the excellent, futuristic fourteen tracks album entitled “Recoding”, produced / mixed by the Sweden artist Mika Rossi, leader of the electro / EBM band Autodafeh and of the synthpop / electro project Endless Shame. Continuing the investigation into the the record archive of Halo Effect we find other two beautiful, consecutive digital-compilations, both widespread in 2014 by EK Product and, analogously to previous titles, entirely remixed by great electro-exponents whom is necessary to mention their names: the first release is entitled “Code Mixing – recoding Remix Album CD 1”, containing fourteen sonic reconstructions forged by Dominatrix, Angstfabrikk, Acretongue, Darkmen, Future Trail, AD:Key, Chemical Waves, Oldschool Union, Dupont, Foretaste, Hypnoskull [de:ad:Cibel], Lights Of Euphoria and Chainreactor, followed by the next “Code Mixing – Recoding Remix Album CD 2”, fifteen acts remixed by the same Halo Effect plus other projets as People Theatre, Massiv In Mensch, Bodystyler, Nydhog, Vanguard, Synapsyche, Social Ambitions, Niko K, Angstfabrikk, Technomancer, Readjust, Dym, Darkmen and Ira-k Organisation.

“Life Is Perfect”, now reviewed by Vox Empirea, is instead the new, great album of 2015, this time released by Space Race Records, parent-label of EK Product: inside it they shine sixteen creations mixed in studio by Rob Early, front man of the American electro / IDM / synthpop band called Retrogramme, who is also an important part of the production of this record. The full-length, magnificently structured in all its forms, summarizes now more than ever all the strengths accrued and highlighted over the years by Halo Effect: technological, futuristic acoustics, studied and applied with professionalism, musics electronically and dynamically exciting, with ‘very danceable’ rhythms and seductive harmonies that always reach their goal, all expressed by very intonate vocals, timbrically unexceptionable, united with catchy keyboards sounds and with clear sequenced geometries. It’s a shining example the opener “The Game Of Life”, a powerfully danceable electro / synthpop track, built through pulsing midtempo bass-lines symmetrically joined with the vigor of chant, all made even more stimulant by streams of programming and by rational synths embellishments. “Alone” features irresistibly danceable electro / synthpop solutions, polarizing the listening by vaguely dark vocals sung by melodic firmness, emphatically surrounded by hard drumming, which algebraic midtempo beats are distributed on the replications of machines and on the synth connexions. The subsequent “My Mistakes” externalizes all its “dancefloor hit” potential: solid midtempo percussiveness designed with absolute rigor, vox extensions which denoting a perceptible specularity with those belonging to Sascha Mario Klein – aka Neuroticfish – together with a futuristic melodism of keyboards and programming, they confer to this electro / synthpop song the role of big tracklist’s protagonist. “White Flag” gives space to the modern romance, slowing the bpm’s scans and propagating harmonious flows of voice and synth from which they transpire notes full of introspection and melancholy, immeasurably intensified during the the refrain. Completely opposite in its nature, the following “The Killer In Me” underlines in its colored midtempo programmed counterpoints a lot of synthpopish analogies typically And One-oriented, expanding and modeling their disciplined progressions inside a concentration of compelling vocals and keyboard iridescences. “Hardcore” is a vibrant, mighty ‘clubby’ synthpop / EBM, formulated through the resolute uptempo compactness of drum-programming and through the dark, lascivious tonal curvature of vocals on which they swirl granular synth fluorescences. The album continues with the post-Depeche Mode similitudes of the following and glorious “Defeated”, a track that chains the listening with its danceable retro-synthpop melodies, which reach immeasurable parameters of attractiveness, all through metronomic, red-blooded midtempo drum-programming, wrapped with shady pads and embellished by a deep chant, so nostalgically darkened. “The Secret I Know” crosses electro / EBM / synthpop coordinates, by the midtempo systematic propulsions of drum-machine and by single-minded vocals, around which spatial, liquid keyboards generate harmonious, advanced sound trails. “Teddy Boy” is an uptempo, pounding and rhythmically danceable electro / EBM track, made ardent by inflexible vocal sections to which they follow feminine sexy-loops that flood of sensuality the final phases of this song. Hypnotically electronic, the wonderful “Among The Flowers” conjugates the subjugating midtempo chillness of drum-programming to a very effective, authoritative voice configuration, all in this dark-synthpop atmospherically kinetic, danceable, rhythmed by resonant impulses and backlighted by icy keyboard projections. “Again” dominates unopposed the whole tracklist, by sonorities pervaded by melodic Depeche Mode’s architectures, which, with disarming quickness, exert a magnetic appeal on the listener, this thanks to a squared percussive midtempo drum-programming which beats, shaping rhythmically with the beautiful vocal / keyboards harmonies, they pave a danceable synthpop for which it’s impossible to find suitable superlatives for adequately describe its beauty, its power of attraction. We continue with “You’ll Never Catch Me”, a track which exciting synchronies of midtempo drumming, of charming voice and keys, they paint an electro / synthpop sheet music that denoting one more time specific affinity with the Depeche Mode sound, especially during the electric guitar arpeggio and during some fundamental singer’s intonations. The luxuriant uptempo percussions of “Dancing Lights” holds this dancefloors-minded electro / EBM song, erected through pneumatic sequences of drum-programming and through darkly reverberated vocals, in a vortex of rhythm and artificial frequencies that spur the rhythmical body movement. It’s the time of the next “Skyline”, an electro / synthpop chapter melodiously technologic and sophisticated, which algid percussive core robotically scans midtempo beats subdivisions, reflecting the moonshine sounds of keyboards and chant, all this before the electro-romantic notes belonging to “Wintery Fall”, a song that reveals soon all its dazzling synthpopish grace, by a wise use of vocals, from whose strophes they widen consonances that enchain the listener, together with danceable, thumping midtempo drum-programming lines and with harmonious keyboard’s emissions. “Made Of Flowers”, the final track, is an experimental, shadowy electro / industrial / synthpop created with admirable refinement, through cosmic pads, sequenced processing, alienating vocal sections and glacial midtempo drum-machine alternations.

Halo Effect is an heterogeneous partnership of talented, constructive minds, whose interaction originates the unifying element between electronic vanguard and rearguard which has codified the prodigious sounds of this modernist invention named “Life Is Perfect”, an album of astounding highness, definable without doubts as an authentic masterpiece of its genre, opportunely materialized in the technological alternative music scene of the latter part of the year 2015. The cited word ‘perfection’, that one conceptually mentioned in the title of the album, wherever it resides, in whatever way it’s manifested or understood, it isn’t comparable to that you will listen to in these sixteen, incomparable tracks. Expect you something amazing. Beyond all your reasonable expectations. 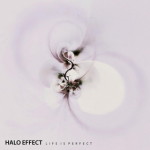