We The North – Unhealing | Review by Side-Line

Johan Hansson (previously involved with Unitary and Cyanide) unleashed the second full length of his newest project We The North. The in 2016 released debut work “Dayblind” revealed an interesting mix between electro-pop and EBM.

“Unhealing” moves on there where the previous album stopped. You get the same ingredients merging melodic pop lines together with harder EBM bass lines. Johan Hansson sings in a pure pop way. Globally speaking the new songs sound a little less hard than the debut work, but you also will hear a few quieter and evasive passages. We The North strikes back with 9 brand-new cuts plus one remix by TourdeForce.

I already liked the previous work (EP included), but “Unhealing” moves a step further featuring a styled, well-crafted and mature production. There’s a perfect balance between the catchy pop elements and harder EBM sequences. The vocals are sweet, but captivating like polishing the pop inspiration of the work. I also noticed great and somewhat vintage like melody lines. “Us” is a beautiful song illustrating this accomplishment. I’m definitely into the harder cuts.

The only thing I’m missing is an absolute hit. And that’s maybe what We The North featured at their debut album with the song “Understand Me”.

We The North is a noticeable new comer at the wider fields of electro-pop music. This band is not exactly reinventing a style where everything has already been experimented with, but “Unhealing” is a cool, noticeable and therefore recommended production. 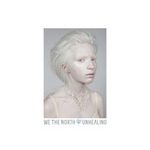