We The North – Unhealing | Review by ElektroSkull

Stockholm-based Johan Hansson, who is probably best known for his future pop project Unitary, have released “Unhealing”, the sequel to “Dayblind” the album that back in 2016 introduced us to his latest creation We the North.

However melancholic music works best during the year’s darker and colder autumn and winter months is up to each and every one to decide for themselves. The concept of “customizing music after the season” itself is of course free for everyone to embrace, or not, as you wish to do. But, as always there are no rules without exception and with that said it doesn’t mean that you can’t enjoy melancholic synth pop, like We the North, only during this time of the year.

Lonelyness, anguish and personal life crisis are some of the themes that are the main focus on “Unhealing”. The album may be a bit uneven, but at the same time it is a competent and well-produced collection of electronic pop songs, stamped in a format that captures influences from the eighties classic synthpop as well as many other electronic styles. It also appears as a quite natural development of We the North’s concept. I may not find as many individual songs that stand out the way they did on the first album, but on the other hand, the lowest level here is much higher, wish gives better overall impression even though the peaks are lower this time around.

When I reviewed We the North’s first album “Dayblind”, I pointed out that I missed the really strong melodies (and maybe a bit more drive) in the songs. A lot of this is now presented in abundance in driven and melodic upptempo songs like like “Nightcall”, “Never Alone” and the sparkling and blippy “Standing By” and “Us”. But even though I find many more reasons to dance this time, there is a somewhat nice layed back skimmer resting over “Unhealing”, which also gives room for nice tempochanges in melancholic sad mid-tempo ballads like “Repair”. Extra credit should also be given for the last and mostly instrumental track “Sapiens” that brings Vangelis to mind.

Johan Hansson doesn’t convey a revolutionary synth pop revolution on We the North’s second full length. But “Unhealing” is a melodious, nice and pleasant addition under the skies of modern synth pop, and parts of the album will definitely keep me company in the continued journey through the winter’s cold and darkness towards the spring’s sunlight and warmth.’ 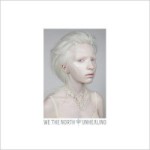