Unitary-acquaintance Johan Hansson, who previously also has released music under the moniker Cyanide, now sets his sights on modern synthpop with the new project We the North’s first full length album “Dayblind”. The album follows up the EP “Endemic” which was released in the summer and dresses up Johan Hansson’s songs in a melancholic and sometimes quite sharp and stylish contemporary synthpop suit.

“Dayblind” opens strongly. After the initial (mostly instrumental) intro “Once Afraid” and the earlier EP’s title track, the strong midtempo ballad “Endemic”, We the North invites us to the lovely dark, gloomy and nicely arranged, chorus strong and sorrowful “Lost Inside”, a song that has quickly become my personal favorite. Together with the other half’s “Understand Me” and the wistful “We All” it is the absolute highlight of the album.

The songs on “Dayblind” vary a lot in quality and although many of the tracks are nicely arranged I’m missing some strong melodies. The other half flows together a lot, unfortunately, largely thanks to the sometimes very long relatively bland intros, outros, and several (almost) instrumental tracks such as “Chrysalis” and the ending track “Impact Winter”.

“Dayblind” is sound and production-wise solid craftsmanship and contains alot of earcandy here and there in the unfortunate absence of really strong songs while it is still good enough to keep me interested enough to watch out for the upcoming releases from We the North. 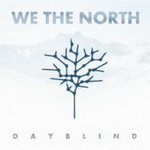