Washington DC’s Retrogramme return with their latest full-length studio album and follow up to 2012’s ‘For Our Dearly Departed’. The band’s pleasing and original blend of synthpop, idm and darkwave has always had a lot of potential to offer and has developed a strong buzz that they now look to capitalise on with ‘Feed’. The strong dance presence is always at the heart of the band’s sound and this hasn’t changed for the new album, neither has the penchant of for cold and futuristic elements. However this time around, things feel a little more complex and mature, as though the band have finally hit their stride.

The depth of the song writing comes in part due to the mixing of styles and elements that sees the band come out of their comfort zone a little more. They can move from hard and dance friendly to softer, darker or even more experimental within the same song and do it without it jarring against your ear.

The production is strong as well. There is still that gritty edge to the production that has a kind of mid-90’s flavour and works particularly well with the old school synth sounds and the guitars. There are one or two spots where the vocals don’t gel as well as they should, but these are very rare occurrences amongst an altogether brilliantly put together album.

The remix dis is a nice addition. They can be divisive and outside of DJs and fanatical completes it won’t sway many people’s decision to buy the album. But there’s nothing wrong with a band giving you a little more bang for your buck, especially with the likes of ProjectK11, TourdeForce, Deadliner, and Citizen 16 offering some excellent reworks of the originals.

Retrogramme have reached their potential with ‘Feed’. Previously the ideas seemed to work on paper, but they didn’t 100% come together on the disc…. however, ‘Feed’ sees everything just work. It all fits into place and sounds completely natural. Hopefully they will push this hard and capitalise on what is undoubtedly their strongest record to date. 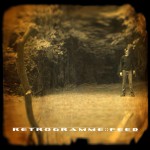