Electropop with a touch of triphop, electrorap, danceable electro, vocoderfilled futurepop and electro rock. Sounds messy? It is. But not in the sprawling and negative sense.

Reaching all the way in today’s hitfocused popscene is as everyone knows no easy task. Retrogramme’s arsenal of different experiments do not necessarily make it easier. But for sure makes this American duo’s latest album “Feed” more original and exciting.

Put together on here are a mix of relatively catchy compositions in a full-on-crazy mess: straightforward chorus strong electropop, as the danceable “She Gives Me Nightmares” are in a subtle way tied together with pieces of bouncy experimental triphop, vocoderfilled futurustic futurepop and spicy experimental electrorock like “Thorn” and “Saved”.

Retrogramme seems to have no limitations whatsoever on what styles that with relative success can be presented side by side on one and the same album. And when one imagines that the final utterly shameless, but oh so brilliant, surprise has landed between the ears then there’s one more. And another one.

Despite the appearance of this sprawling unity I’m both fascinated and confused, mostly of admiration. 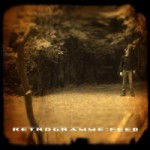