Hailing from Washington, D.C., the band Retrogramme may be one of the best kept secrets in American darkwave, but with the release of their third full length, that may soon change.

Do a quick Google on the band, and you’ll see the words synthpop, IDM, darkwave, and even electrogoth bandied about to describe the wondrous flavors that sweep through your mind when presented with such an aural feast. And their newest, Feed, is aptly named for such an endeavor.

After a quick amuse bouche of the “Feed (Intro),” we’re presented with a dueling entree of vocalists and lyricists Jenna Christensen and Dmitry Pavlovsky on their single, “She Gives Me Nightmares.” It’s a catchy little number that had me dancing around my kitchen.

Hey, give me a break. You listen to your music where you’re comfortable, and my office is in my kitchen. Kinda ironic when reviewing an album entitled Feed, ya know?

What follows is a veritable smorgasbord of songs that catch your attention. Tracks like “Thorns” and “Confidant” showcase the fact that Retrogramme isn’t a cookie cutter band. Rob Early’s synth work and programming do justice to Nikk Allen’s songwriting, and between the two of them, the production is tight.

Other tracks like “Saved,” “Psychosis,” “It’s Time,” “Furthest Planet,” and “Unsettled” also stand out in their complexity. That isn’t to say that there are bad songs on this disc. It’s just the opposite, as even the weaker songs stand stronger than most works I hear on a regular basis. You could listen to this album several times over and find a new favorite track every time. This is due to the brilliance of having guest vocalists like Controlled Collapse’s Wojciech Król, Laya Monarez, and Shane Gardner, as well as guest musicians Roy Retrofit (Red This Ever) and DJGX to spice up the tracks. Shake well, and it all comes together harmoniously.

Feed is a double album, and the second course is filled with remixes. While remix discs can usually be a mixed bag, there are strong contenders here.

TourdeForce’s efforts on “Unsettled (Goddamn Italo Disco Remix)” and Halo Effect’s “Confidant (Enough Is Enough Remix)” are among the standouts, and Echoknocks does a great remix of “She Gives Me Nightmares” that transports me to a late night house party.

What makes the remix disc work is that the source material is strong enough on its own, and the remixes are just the extra herbs and spices that make the songs tastier.

All in all, this is a great effort by Retrogramme. And if, like me, this is your introduction to the band, you’re going to be doing your best to find their earlier offerings. Feed just whets your hunger for more. And that’s truly a good thing. 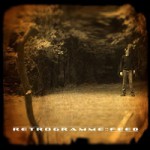