Again Mexico sends its sons. Of course, there is Hocico, which is the big name in the electro scene, but now we are introduced to the Mexican electro trio Para Normal.

After Evidence Is Everything, these guys present their second album The Cold Room. Their purpose is quite clear: to conquer the alternative dance floor. Their mix of dark synthpop, EBM, a touch of industrial and some dark wave is not something that you can put in one category easily. Anyway, I hear influences of Depeche Mode, New Order, Covenant or A Split Second.

The album contains 11 pure electric tracks, and Para Normal is clever enough to avoid doing the same song over and over. At the contrary, each track has its own character, but at the end of the day they all fit together. Dark rhythms, sometimes dreamy synths and dark beats that are complemented by harmonious, dark vocals. Do not expect any aggression on this album, just some nice synth pop with the occasional nod to the harder work. That’s not surprising when you know that the mixing and mastering was done by Claus Larsen of Leather Strip fame.

Perhaps the intro’s of the songs are a bit too long to make them real dance floor killers, but Ghost Radio, Lies, Reaching Hands and Blind World should find their way to the dance floor. 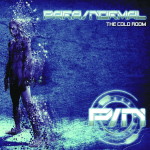