The synthpop in the mind and love for the melodies in the blood: these are the winning features that the Swedish Wilhelm and Emma transmit since 2002 by their project Mechatronic. The music created by the duo is an harmonious union between futurist pop with vague EBM nuances, created through voice clearness, danceable drumming and sparkling keyboard expansions, peculiarities extensively listened in their albums “Promises From the Past” of 2003, “Dreams” of 2013 and more intensely now in the new, awaited album entitled “Dystopia”.

Mechatronic have searched and found over the years a prominent position in the electronic scene, thanks to their compelling and carefully constructed sounds which promises once again many minutes of pure entertainment.

The twelve tracks of the new release are a true cascade of electropopish freshness that will pour nicely in your ears, flooding them by dynamic drum-programming pulsations, catchy male vocals and crystalline synth effervescences, whose synergy demonstrates aesthetic finesse, sonic genious and the ability to rhythmically make dance your body: the feeling with this album will be simply instantaneous. 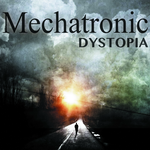