Considered as one of the best Italian technological-projects, Halo Effect possess the rare ability to involve listening through a portentous combination among futurepop, electropop, EBM and darkwave, characterized by increasing rhythms and ‘very-catchy’ / super-danceable harmonies. Reached by now a well-established soundness built since the year 2001, the band publish its fourth album entitled “Life Is Perfect”, with the aim of conquer the masses of electro-followers.

The new full-length is a real, efficient generator of energy and melody, concentrated in sixteen songs in which the vocalist spreads atmospheric, passionate intonations, while the propulsion of drum-programming draw geometric traces and synths adorn the structures by avant-garde modulations, all in a fantastic triumph of futurism, meaningful lyrics and highly seductive electronic musicality. Halo Effect prove to have assimilated only the best from the European techno-pop, conceiving and materializing impeccable architectures in a complete, authoritative album of strong resonance, inevitably destined to an unprecedented success. Make you drag without delay by the extraordinarily evolved formulations of “Life Is Pefect”, a release that will enchain you from the first track to the last, in a succession of irresistible dynamism, intelligence and futuristic euphonies. 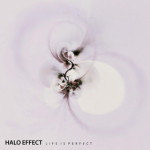