Content: We discovered Nine Seconds in 2012 with their self-released 12” “Irresolution”, followed in 2013 by the official debut album “Poladroids”. Nine Seconds now strikes back with a new and empowered long player entitled “Nothing To Confess”.

The band consisting of ex-Sleepwalk singer Oliver Spring, and No Comment founding members René Ebner and Thomas Kowalzik seems to be the living proof that even after years of commitment a ‘new’ start can be very exciting. The new work reveals identical influences, which are a solid sound bridge between EBM and synth-pop. “Nothing To Confess” however sounds empowered by EBM treatments, which especially come through in the solid bass lines and the cold choruses. Oliver Spring who sung on Sleepwalk in a very rough and cavernous ways transposed himself into a much more charismatic vocalist for Nine Seconds. It was already true at the previous album, but the production of the vocals became even better now. Spring is singing in a rough, sometimes passionate, but especially alluring way.

René Ebner and Thomas Kowalzik both are experienced musicians who have been active since the late 80s. They perfectly know how to compose an alluring production, which is mainly carried by great sound sculptures. Most the choruses are quite noticeable for their cold sound, but still for the melodic approach. But I think that this album reveals both musical mates with a real great inspiration. “Attractive Lies” and “Pompeii” both are remarkable cuts and even some of the best songs they’ve written in years. The sound is pretty EBM-like and sometimes a bit reminding of early No Comment, but with an extra modern touch on top. The reinforced EBM-style of this work makes that “Nothing To Confess” could have been released on EK Product as well. But Space Race Records is devoted to electro-pop orientated productions and that’s for sure an element coming through on some songs. But you never will hear me say that Nine Seconds is a ‘standard’ synth-pop formation. They’re more into a kind of body-pop format.

Nine Seconds also reveals astonishing sound treatments like numerous filtered bleeps, which are especially noticeable on “The Forgotten Man” in which some parts of Oliver’s vocals have been produced by a good-old robotic effect. One of the most noticeable cuts -although not my favorite one, is the cover version of Front 242’s legendary hit “No Shuffle”. I’m missing some coldness and especially rage and passion in the vocals. Covering Front 242 remains however one of the biggest challenges, but I’m sure this is the kind of song that will be much appreciated on stage.

The last chapter features three interesting remixes. Cryo vs. Nine Seconds did an amazing job on “Waiting For The Last Kiss”. The original version is already excellent, but this one is harder and club-minded. Mind.In.A.Box is a judicious choice for the sound intelligence of this band, which however can’t totally put its stamp on the remix of “Attractive Lies”. It’s a bit the same for “Antistar Machinery”, which was reworked by Claus Larsen of Leather Strip. You for sure will recognize the typical dark bass line of Leather Strip and Larsen’s typical timbre of voice.

Conclusion: The global aspects of the production have been improved resulting in a more EBM-driven album, which has the potential to put Nine Seconds on the international map of EBM. 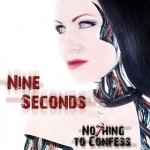