Two years after their successful debut album “Warnemünde” the German Gimme Shelter strikes back with a new opus.

This band remains driven by the creative force of electro-pop music with some extra, powerful EBM elements on top. The solid bass lines have been joined by danceable kicks and a melodic leads. Some passages are somewhat elevating. Some of the vocals are sung in English and some in their mother tongue. Globally speaking I would say that the EBM influences were more noticeable on their previous work.

Gimme Shelter confirms the potential they revealed on the debut album. This band is not into innovation, but doesn’t sound like a copyist. They’ve created their own body-pop sound, which is based upon a well-crafted production. There are several cool cuts running through this work and maybe one potential hit entitled “Keep Your Secret”. I also recommend the instrumental “Gagarin I” featuring cool spoken samplings instead of vocals.

The body-pop style definitely is their strongest component while a few cuts, which are more into ‘traditional’ electro-pop left me a bit skeptical.

Gimme Shelter is maybe not the ‘big’ name among the electro-pop bands, but they again confirm to have a real talent to compose well-crafted and efficient songs. I think they’re one of the best bands from the Space Race Records roster. 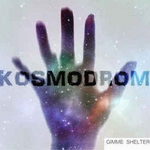